When a bicycle needs repair often a replacement part will be required. A modern bike can be fitted with a modern part which is usually readily available.

On an old bicycle it is often possible to get the bike back on the road by fitting a modern part, but in doing so we lose some of the authenticity of an historic machine. As new parts for old bicycles are often obsolete and unobtainable it is often necessary to use an good condition old part that has been reclaimed from a scrap bike.

These reclaimed bicycle parts are usually scarce and will often command a higher price than the equivalent new part.

It can be argued that authentic internal Sturmey Archer parts are not important. New internal parts will not change the appearance of the bike. Many old hubs can be brought into working order using new parts. 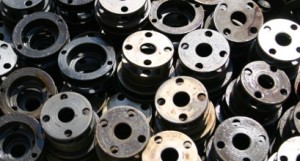 However Sturmey Archer parts from the early 1960s and before were better made than later equivalent parts and are worth consideration when repairing your aging Sturmey Archer hub gear.

External parts such as cones and sprockets always look better if an original part is used rather than the modern equivalent.

If you are looking for a common but authentic part for your Sturmey Arhcer hub, please give me a call. I have a large stock of good condition reclaimed bicycle parts for Sturmey Archer gears.