Over the next few months I will be adding more pages, more pictures and a lot more useful information about the products of this fascinating British company. Please bookmark this page and come back often.

Here are some sections that I will be adding:

The Hub Gear Syndicate which was soon to be called Sturmey Archer began making hub gears in 1902. Design changes happened every few years until in the 1930s the company standardised production with almost all hubs produced around their A-series design. From that time many parts were interchangeable. For instance there was just one clutch which would fit all three speed hubs and all four speed hubs. They continued developing and producing hub gears and other related products until the factory was closed and the business sold to the Taiwanese company “SunRace” in 2000. 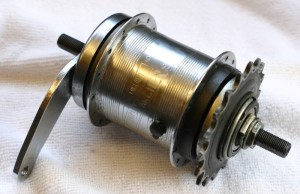 Sturmey Archer are best know for their hub gears. The AW 3-speed hub is well known even to people who don’t ride a bike.

The Dynohub was introduced in the 1930s and continued into the 1980s.

Sturmey Archer also made many other bicycle parts and at one time even made gearboxes for motorcycles.