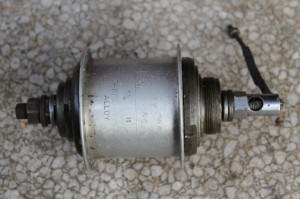 The hub shell is definitely from a Sturmey Archer AM hub and is dated November 1950. However the driver is threaded for a screw-on sprocket which is incorrect for a pre 1951 AM which should have the twelve-splined sports driver.

Also there is no evidence of an indicator rod protruding from the left axle even though there is clearly a toggle chain from the right. This suggests a single piece screw in indicator/toggle rather than the two part indicator which would be correct for the Sturmey Archer AM hub.

The seller is describing this hub as untested which may be true or may indicate that they are aware of something which they would prefer not to reveal. I can tell that the internal has been removed from this hub and has not been ridden since because the ball ring is not screwed in fully.

If this is a Sturmey Archer AM then the driver and the axle key has been changed. Although this is possible it is very unlikely.

If I were to be asked to remove this internal I would expect to find a pre 1951 AW rather than the pre 1951 AM which the hub shell and the auction title would suggest.