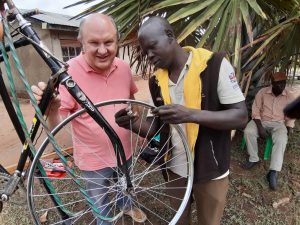 Lamek being taught how to true a bicycle wheel.

I have just returned from an amazing time in Uganda where I was teaching a man how to build good strong bicycle wheels.

Bicycles are a vital means of transport in Uganda and are used to carry both people and goods. Most bicycles are overloaded and the roads are mostly unmade and those that have been tarmacked often have more potholes than road. Good strong wheels are essential but sadly not frequently seen.

I bought a pair of brand new wheels in Lira (a town in northern Uganda). I paid 50,000 Ugandan shillings for the pair. Due to the excellent exchange rate that is just £10 in UK money. Although they were new it didn’t take me long to realise they were in appalling condition. The rims were bent and the spokes had very little tension.

When there is very little money people will settle for a lot less. There is an attitude of “It works, it’s fine” when actually it doesn’t work very well at all.

We drove across to Elebtong which is a very small town just over 40km to the east.

In Elebtong I met Lamek, a man from the Langi tribe whom I had already met during my visit last year.

I spent a day with him showing him how to dismantle the new wheels, straighten the rims and rebuild them correctly. We then fitted them to a bicycle to true and tension them.

The following morning Lamek was working on the wheels of his own bicycle which had more than a quarter of the original spokes missing. He did an excellent repair and his bicycle now has two good strong wheels which will serve him far better.

I’m sure Lamek will now go on to bless many other people by providing a much-needed wheel building and repair service in the Elebtong district of North Uganda.